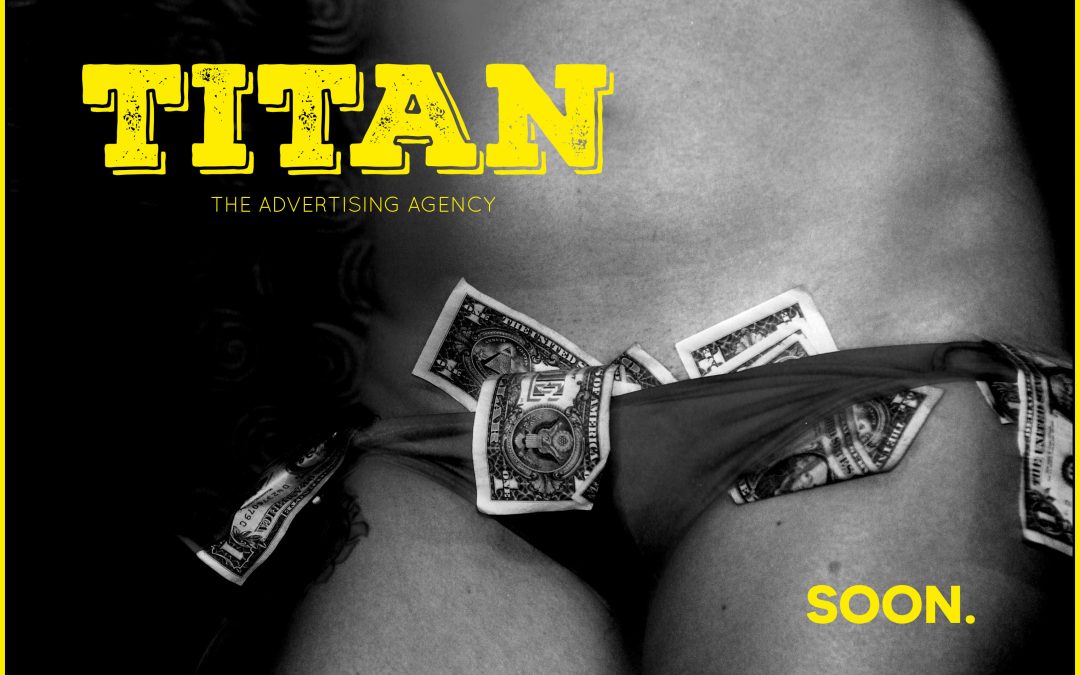 MARKETING’S a mad old business, isn’t it ? Stuck in a relentless, blood curdling battle between negative and positive perspectives.

The battle rages between the executioner’s rules, the hang ’em high reactionists, the woebetiders, the statos, the zealous silver liners, the fire’n’brimstone merchants, the crazy cavalcade goes on and on.

We ran the “Dollars In Knickers” photo on Linked In as a teaser post for Titan’s forthcoming website a few months ago and ad land’s good, bad and ugly were immediately all over it like a rash.

Damning comments, hysterical end of the world forecasts, assassins lining us up in their crosshairs, Emmeline Pankhurst spinning in her grave and Mary Whitehouse threatening to banish us off of the entire tinternet forever and ever, amen.

I deleted it after over 7000 unboosted hits in the first six hours while coming under heavy attack for misogyny, sexism, exploitation, sales of snake oil, kidnap of Shergar and probably the theft of the f***in Elgin Marbles if I’d left the post up any longer.

And, crucially, not a single LIKE. No, not a one.

But that post drew incredible attention and it made folk react to a spanking new brand. The one we call Titan.

Titan’s an agency that doesn’t like to compromise too much.

It’s an agency that was created in order to provoke and push ingrained boundaries and sensibilities and so allow our clients’ marketing to linger a while long in the consumer’s consciousness. Precisely what every marketing agency should be doing, frankly.

It’s Titan’s business to make consumers ask WTF IS THIS ? And then entertain while providing a clearer picture. Thereby elevating the client’s sensibility as a proposition.

Let me show you how.
That “Dollars in Knickers” ad wasn’t all that it seems, you see.

It wasn’t actually a woman pictured, for one thing. And not quite a man either.

What it was was a mid-op/transitioning performer earning a couple of extra bucks on a hot Saturday night.

What else ? Well, the image was shot before Caitlin Jenner and the world’s current heightened focus on gender identity.

Something else. While the photo was shot I was sitting with Harvey Weinstein’s former personal assistant. No kidding. A pal of mine. All pre-public disgrace, of course.

Okay, even better, the photo was taken while the male lust object of the world’s biggest feminist show* happily watched on. Matter of fact, it was his bar we were sat in.

Okay. At the opening of the Manhattan exhibition where the photo took centre stage, The Guardian’s New York correspondent sat beside me and waxed lyrical about the image. Might even have bought a print of it !

To the naysayers, please put all of this in your pipe and smoke it.

For the record, no, hell no, I wouldn’t have clicked LIKE on that post either if I were you- flimsy knickers, cash and flesh ?! Just not the corporate thing to do for absolutely anyone except a red blooded marketing agency, is it ?

Still though, MADE YOU LOOK, didn’t we ?!