Tanks. But No Bleedin’ Tanks. 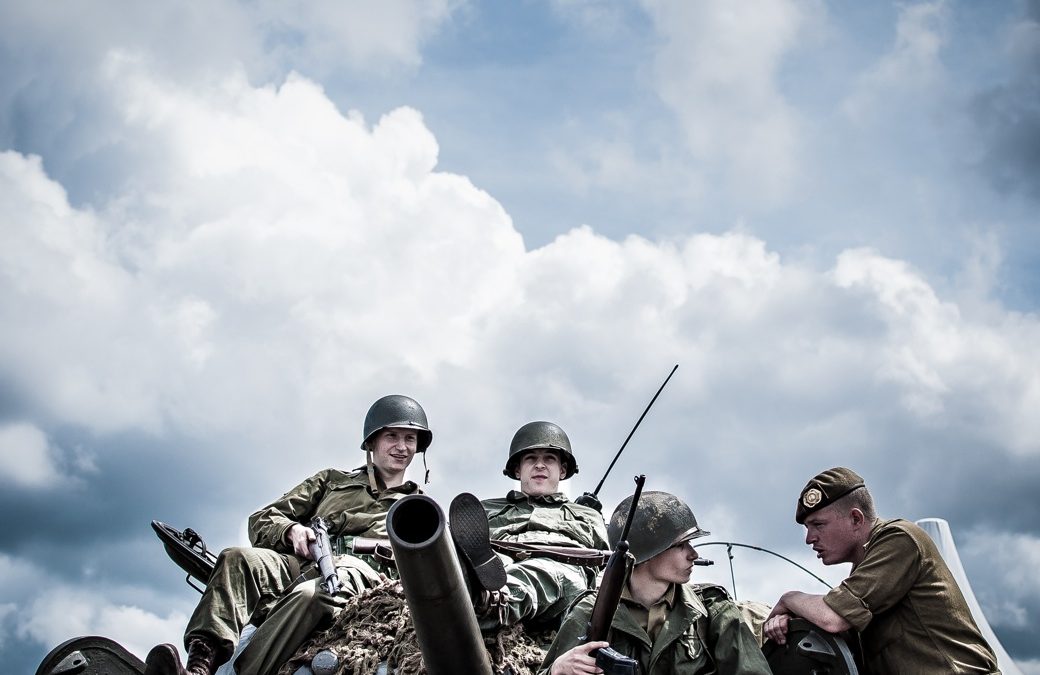 by Jack Regan. Copywriter at Titan.
This work originally appeared as a column in J’Aime magazine. Oct 2018.
GOOD GOD ALMIGHTY but this is all a bit too far above and beyond the call of duty, for a chap of my vintage, is it not ?! No, no, no this is just not cricket at all !
I’m driving a fifteen ton tank, for crying out loud ! Yes, A TANK ! Gone a bit mutton jeff, here, sorry ! SORRY, VICAR, IT’S THIS INFERNAL BLOODY RACKET ! Flat out, pedal to the metal, bouncing about like a pinball inside this growling, hulking behemoth, the sweat cascading out of me and some war-torn, ‘Nam fixated commander type nutter shouting and bawling directions at me down my headphones while two lilly livered pansies behind me are whimpering into their comfort blankets about the quality of my driving, fcs! The fumes in here potent enough to KO Zammo McGuire offa Grange Hill and, to top it all off, there’s some sniggering posh boy careening, spiral-eyed right behind us in another tank, trying to bazooka us all to oblivion or beyond !
This is a blitzkrieg to the senses like few experiences one could ever dare imagine.
And it’s just so aggressively deafening and effin’ and jeffin’ LOUD in here too. And everything’s too smotheringly, overbearingly close around you. It’s… actually it’s a bit like being trapped inside a drunken American, is what it is. Sweet, I suppose, if that American’s called Kardashian but not if it’s called Sherman! No siree !
But I’m trying to chill. I am ! I’m trying to focus here. Just bare with me here for a tick till I, y’know, till I sort myself out a tad.
It’s all a bit frantic this armoured vehicle lark, isn’t it ? All a bit frenetic and discombobulating when you’re used to driving a clapped out Prius, like me.
Sure, yes, it had all sounded like good clean fun when the column was suggested too. All very sedate and Dad’s Army and all that.
The tanks are from the Seventies so, I reckoned there’d be more chance of the steering wheel falling off than of one of these things ever working up a decent head of steam again.
Now I have a heavily bruised coccyx to prove just how wrong I was about that. And, yes, that’s every bit as painful as it sounds, thank you very much. Matter of fact I didn’t even know what a coccyx was or that I was in actual possession of such a thing until about ten minutes previous.
Right, but hang on, sorry, folks, let em explain.
I’m on a tank driving experience here. Somewhere deep into Leicestershire with a mob called Armourgeddon, which is a cool name for any organisation that’s in the S&M business, like this mob would very much seem to be.
And I’m simulating battle now on a World War II bombing range, driving this tank hell-for-leather with these two lily livered peaceniks whimpering behind me while another tank attempts to shoot us up the arse with its cannon that’s equipped with massive paint balls. All a bit breathless, as previously described.
The object of the game here is to basically be the tank that splatters the other tank with more of these paint bombs than the other guy, so that means us tearing ferociously around the countryside hiding in bushes and thickets and under cow dung, desperately trying not to get splattered.
When the artillery and flak starts flying thick and fast we’re ordered to get the turrets down and so I end up driving this hell on wheels looking through a bit of muddy glass about the size of a fag packet. Which means I have my face squished right up next to it and getting my eyes battered and blackened and my nose mashed every time we hit a bump. Which is, y’know, every other second in here !
Are you sensing that I’m not that chuffed about all this madness ? Good, good. Delighted I’m managing to communicate that.
I mean I suppose it would be a good laugh if you’re coccyx is made out of plasticene and you don’t mind every single filling you ever had from the dentist being chattered and harried and crunched right out of your skull, but for me this is worse than war !
For the detail fixated amongst you, this tank runs a big Rolls Royce multi-fuel engine and gets about 5mpg. It weighs 15 tons and can reach speeds of 32 mph. Though no one alive has ever recommended that- even under enemy fire.
Apparently rough and ready types can’t get enough of this stuff, booking and rebooking again months in advance, but I must be one of those unusual creatures whose preference is to enjoy his spinal column linked together.
Bizarrely enough, this very tank I’m being tortured in is the same one that Princess Diana drove during a state visit to Berlin in nineteen canteen and she loved it, bless her. She must have been made of sterner stuff than me.
So I’ve spent the worst part of an hour in this vicious hulk, seeing off the cacophonous challenges of umpteen posh boy weekend warriors and I’ve had enough. And am now skidaddling shamelessly for the sanctuary of my little Prius where I shall listen to the soothing cadences of Radio Four all the way home and I can tell you I hope I never see the likes of that bloody contraption ever again. I think I’d rather endure enemy fire, quite frankly.
But that shouldn’t stop any of you lot giving it a bash.
Just, y’know, you-have-been-warned. God speed to you and may The Force be with you and all that malarkey, if you decide you genuinely fancy it.
Tanking is an adventure or a gift that should be undertaken or supplied exclusively to the very, very machoest of men. Y’reading this Mum ?! Never again, says I ! NEVER, EVER, EVER AGAIN !
ENDS…