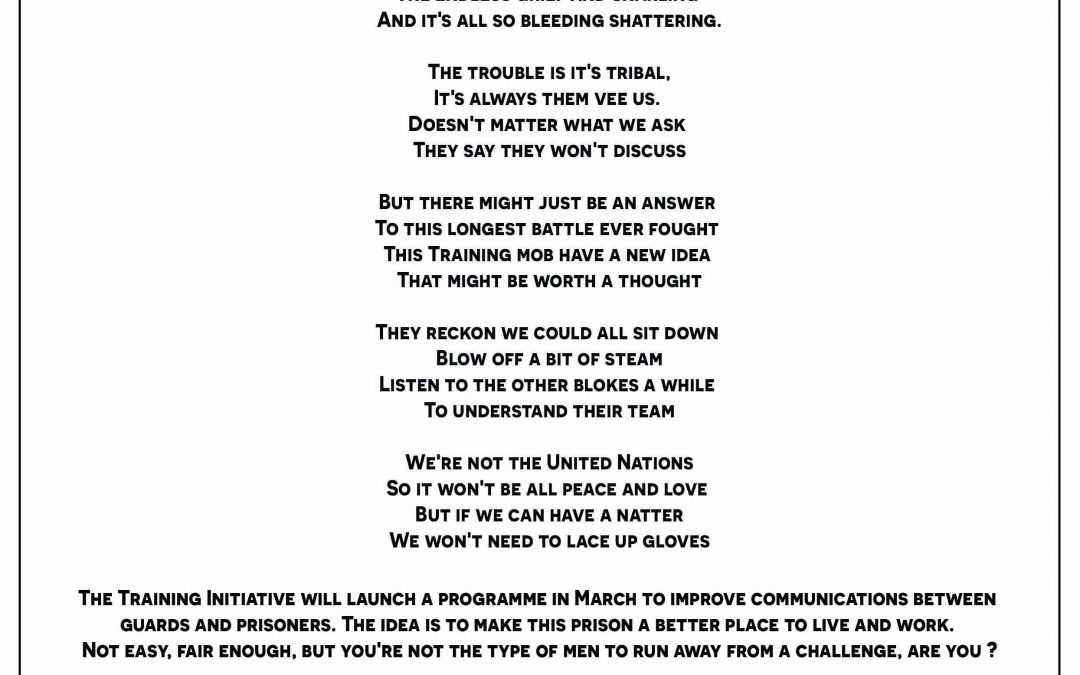 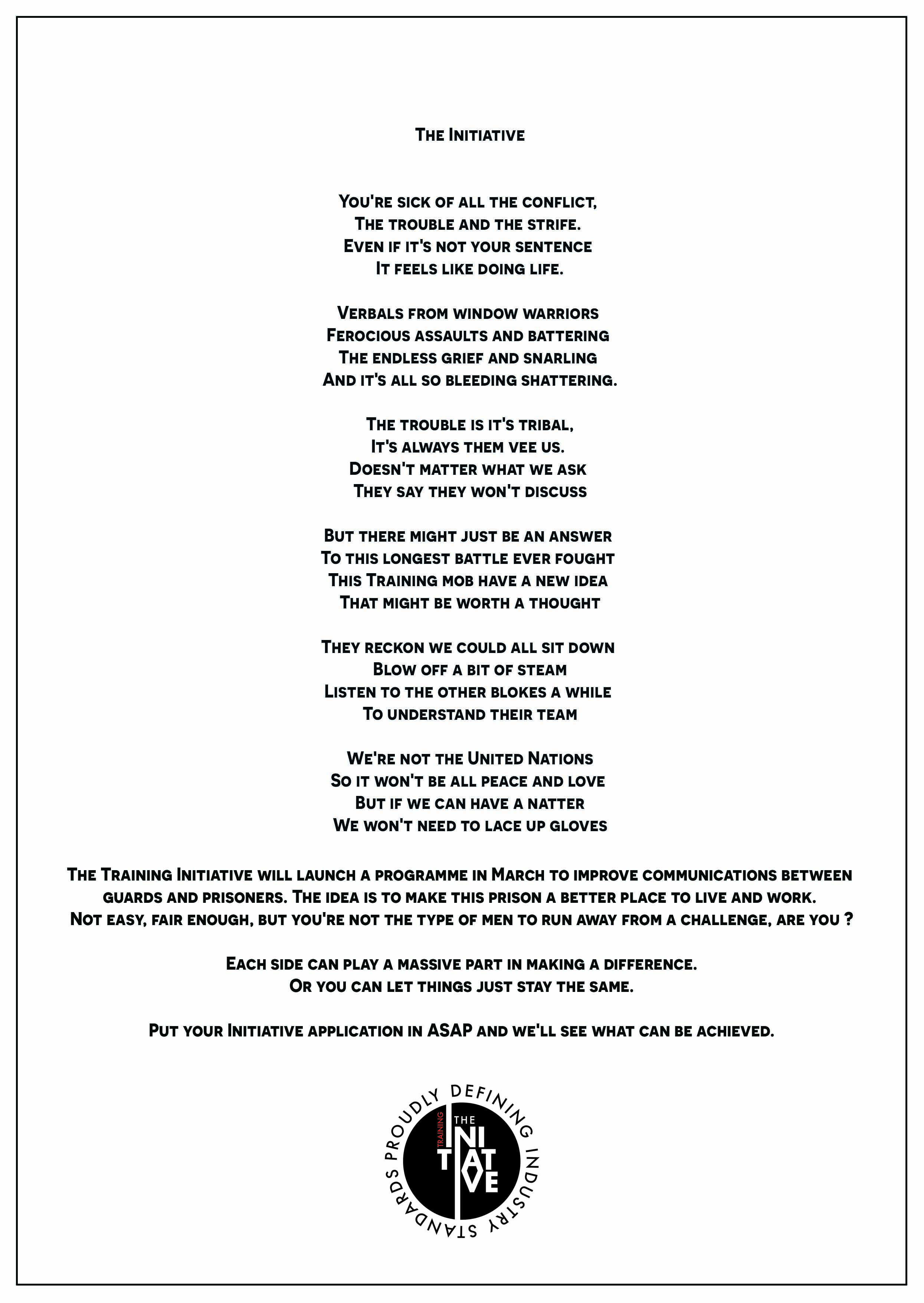 SO THERE ARE well over a thousand very unhappy men in this prison, counting inmates and guards. The inmates are made up of a mixture of thieves, drug dealers, extortionists, arsonists, armed robbers, rapists, murderers and unhinged bampots. As one can imagine, the guards dealing with these types of men are a ferociously hardened bunch themselves.

And so, two weeks after the Stormtrooper posters went up, we thought what better way to appeal to these battle scarred long termers than with a few stanzas of lovely rhyming poetry.

What could possibly go wrong ?!

Please have a read at the mailer above…

We had the same sole, anonymous guard slip these “mailers” under the door of each cell in the middle of one cold, rainy night and were nothing short of delighted to find it was all the prison population could talk about the next morning.

You’ll notice there is a call to action this time and our client was delighted to receive a flurry of applications to attend the programme and we were chuffed to have gained some traction in what had started off in Titan’s short history as the mission least likely to succeed.

We’d set out to get both sides communicating and we had achieved that with the whole prison talking about what we’d introduced them to. Many were cynical in the extreme, to be fair, but the first great achievement in the communications biz is to get a reaction from your audience.

Truth be told, on the day of the programme’s actual launch, where prisoners and guards would congregate and sit down to air their grievances, we had absolutely no idea what to expect. Our client discussed having tea and cakes on hand as well as a full “riot squad” in close proximity. So it was really in the laps of the gods.

Or rather in the laps of someone quite the opposite, as it transpired.

Of the screws and lags who showed up on the hour for the programme we could count a handful of lifers and some very world weary screws and the client was immediately happy at what had been achieved at that stage alone.

Getting these guys around a table at all, given the extreme animosity, was a major result. But it wasn’t until the chap we’ll call Gangster Number One appeared at the door of the room that we realised we had achieved something quite spectacular.

This chap was recognised by many as the “daddy” of the jail, had a police record that included various missing persons attributed to his work on the outside and a long history of grisly encounters both inside and outside the nick. If you can imagine how a shark splits a shoal of fish as it swims through them you’ll have an idea of this chap’s level of sinister presence as he sashayed his course around our jail.

But the dude came in to the room ready to talk and ready to listen and determined to see what could be achieved.

The mediator our client had hired to run the show that day was an hugely experienced former civil servant who had seen just about everything in life that there was to see.

But he’d never seen anything like this before. Both sides, presumably inspired by Gangster Number One’s enthusiastic presence, began to hammer out problems one after another, finding common ground and understanding over a series of historically unbreakable issues. This process went on uninterrupted for hour after hour.

Our chap described the air as blue with industrial-strength language, even by prison standards. But it was working.

But he also relayed that participants from both sides had independently described the first day of the programme as the most successful in the prison’s entire history.

Naturally we were over the moon to have achieved so much from our work and having established a genuinely successful template for helping calm violence levels in every jail. But there was more to come.

Within the month Titan and our client had been summoned to parliament, where a Conservative MP had heard about our work and wanted to see how our methods could make a difference in other prisons the length and breadth of the land. So we were promptly going from one big mad house to another.

But that’s a story for another time.